Home » News » This year’s redistricting calendar? It’s all up in the air!

This year’s redistricting calendar? It’s all up in the air! 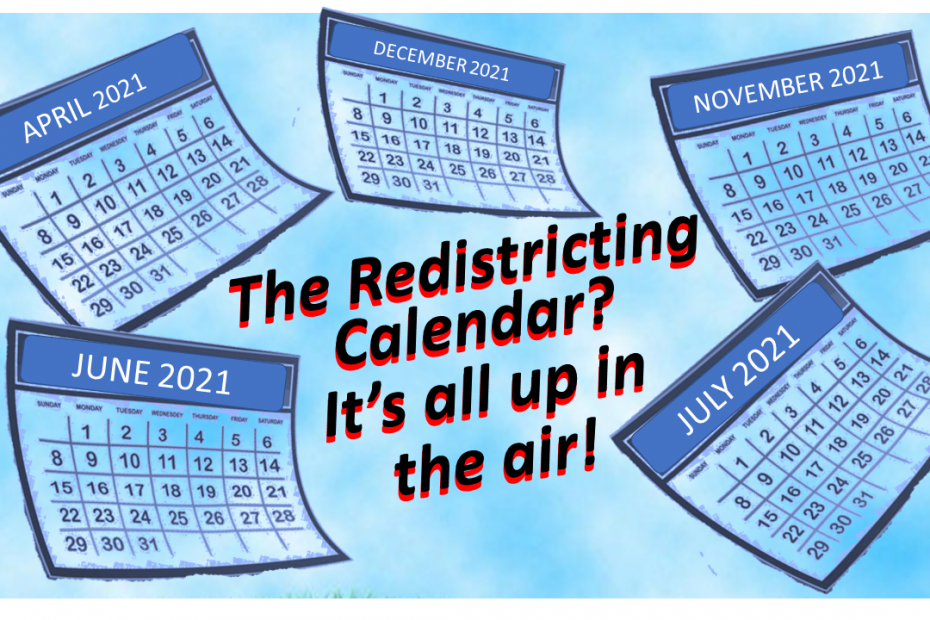 You’ve probably noticed that 2020 was not a normal year and that 2021 is off to a pretty rocky start, too… The 2021 redistricting calendar, like everything else, is thrown up into the air by the many delays and uncertainties generated by Covid.

That’s because the redistricting depends on the 2020 Census data. And that’s been delayed by–you guessed it–COVID. Covid drastically reduced the deployment of Census workers who normally would knock on doors to fill in missing responses, for example. The Census folk up in Washington now have their work cut out for them to produce the most accurate population figures possible.

On February 12, the Census Bureau announced that population data will not in fact be delivered on time in April, despite what the law says. Data won’t actually be delivered until September, and it could be even later.

This means that the redrawing of our election districts for county commissions (and the US Congress, NC legislature, town councils, and school boards) will not happen until this fall, either. Redistricting and the Census data are joined at the hip. In fact, the original reason for the Census—and why it’s in our Constitution—was to provide updated population numbers to reallocate Congressional districts among the states. (NC is expected to add a 14th seat for 2022!)

At the local level, the Covid delay makes it effectively impossible to redraw the municipal boundaries in time for candidate filing this July. Fortunately, NC law already provides for such a situation. If necessary, municipalities and school boards can use the current districts for the 2021 elections or even postpone the elections. No decision has been made on this yet, though. The approach chosen by each locality will depend on how far off the current districts are from the “ideal” population, based on estimates of the growth or decline in local population. The legislature may also weigh in on this.

The data delay pushes the redistricting timeline up against another deadline, though: the candidate filing period for county commission and other races on the 2022 ballot. Normally (and by law) this should take place in December 2021. But candidates running from districts cannot file until they are sure where the boundaries of those districts lie and whether they are in fact residents of the district they plan to run in.

This raises several questions. First, will the new boundaries be ready in time for the filing to proceed as usual? If not, will the legislature (or the court) move the filing period? If they move the filing, will they also have to move the 2022 primary date? Given that NC’s primaries were in May for many years, moving the primary to May, say, is hardly a disaster, but may require special legislation. It should not affect the November election at all, though.

The second question, though, is whether some folks will try to use the delay as an excuse to limit public input and instead do a quickie district redraw behind closed doors. All of us, local residents and groups like Fair Counties NC alike, need to be on guard to be sure this doesn’t happen.

Covid or no Covid, voters must be able to participate fully in the process. The commissions must provide enough time to hear from county residents before and after they redraw, incorporate their preferences into the proposed maps, and respond to any public concerns over districts boundaries before they finalize the maps.

Calendar constraints brought to us by Covid should not prevent adoption of maps that respond to voters’ input, keep their communities whole to the greatest extent possible, and provide full and fair representation for our state’s voters.

We’ll all be happy to see the back of the current pandemic, but we sure don’t want it to be replaced with an epidemic of gerrymandering!